HomeJumièges Abbey
Book or collection of books in the Bible
"Twelve Prophets" redirects here. For the sculpture, see Twelve Prophets of Aleijadinho.

The Minor Prophets or Twelve Prophets (Hebrew: שנים עשר, Shneim Asar; Aramaic: תרי עשר, Trei Asar, "Twelve") (Ancient Greek: δωδεκαπρόφητον, "the Twelve Prophets"), occasionally Book of the Twelve, is a collection of prophetic books, written between about the 8th and 4th centuries BC, which are in both the Jewish Tanakh and Christian Old Testament.

In the Tanakh, they appear as a single book, ("The Twelve"), which is the last book of the Nevi'im, the second of three major divisions of the Tanakh.

In the Christian Old Testament, the collection appears as twelve individual books, one for each of the prophets: the Book of Hosea, Joel, Amos, Obadiah, Jonah, Micah, Nahum, Habakkuk, Zephaniah, Haggai, Zechariah, and Malachi. Their order, and position in the Old Testament, varies slightly between the Protestant, Catholic and Eastern Orthodox Bibles.

The name "Minor Prophets" goes back apparently to St. Augustine,[1][non-primary source needed] who distinguished the 12 shorter prophetic books as prophetae minores from the four longer books of the prophets Isaiah, Jeremiah, Ezekiel, and Daniel. 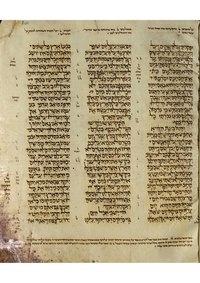 A high resolution scan of the Aleppo Codex containing parts of the Book of the Twelve Minor Prophets (the eighth book in Nevi'im), from 10th century.

Scholars usually assume that there exists an original core of prophetic tradition behind each book which can be attributed to the figure after whom it is named.[2] In general, each book includes three types of material:

The noteworthy exception is the Book of Jonah, an anonymous work which contains a narrative about the prophet Jonah.

It is not known when these short works were collected and transferred to a single scroll, but the first extra-biblical evidence for the Twelve as a collection is c. 190 BCE in the writings of Jesus ben Sirach,[4] and evidence from the Dead Sea Scrolls suggests that the modern order of the Tanakh, which would potentially include the twelve, had been established by 150 BCE.[5] It is believed that initially the first six were collected, and later the second six were added; the two groups seem to complement each other, with Hosea through Micah raising the question of iniquity, and Nahum through Malachi proposing resolutions.[6]

Many, though not all, modern scholars agree that the editing process which produced the Book of the Twelve reached its final form in Jerusalem during the Achaemenid period (538–332 BCE), although there is disagreement over whether this was early or late.[7]

The comparison of different ancient manuscripts indicates that the order of the individual books was originally fluid. The arrangement found in current Bibles is roughly chronological. First come those prophets dated to the early Assyrian period: Hosea, Amos, Obadiah, Jonah, and Micah; Joel is undated, but it was possibly placed before Amos because parts of a verse near the end of Joel (3.16 [4.16 in Hebrew]) and one near the beginning of Amos (1.2) are identical. Also we can find in both Amos (4.9 and 7.1–3) and Joel a description of a plague of locusts. These are followed by prophets that are set in the later Assyrian period: Nahum, Habakkuk, and Zephaniah. Last come those set in the Persian period: Haggai, Zechariah, and Malachi, although some scholars date "Second Zechariah" to the Hellenistic Era.[8] However it is important to note that chronology was not the only consideration, as "It seems that an emphatic focus on Jerusalem and Judah was [also] a main concern.[4] For example, Obadiah is generally understood as reflecting the destruction of Jerusalem in 586 BCE.[9] and would therefore fit later in a purely chronological sequence.

The first part of the book of Twelve Minor Prophets (the first book is the Book of Hosea) in the Codex Gigas, the largest extant medieval manuscript in the world, from 13th century. Now at the National Library of Sweden in Stockholm.

In the Hebrew Bible, these works are counted as one anthology. The works appear in the same order in Jewish, Protestant and Catholic Bibles, but in Eastern Orthodox Christian Bibles they are ordered according to the Septuagint. The books are in rough chronological order, according to explicit statements within the books themselves.

The twelve books are:

In the Roman Catholic Church, the twelve minor prophets are read in the Tridentine Breviary during the fourth and fifth weeks of November, which are the last two weeks of the liturgical year, before Advent.

They are collectively commemorated in the Calendar of Saints of the Armenian Apostolic Church on July 31.