Skip to content
Street in central Cambridge, England
Not to be confused with Trumpington High Street or Trumpington Road. 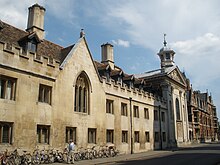 The Trumpington Street façade of Pembroke College, with the chapel on the right, the first building to be built by Sir Christopher Wren

Trumpington Street is a major historic street in central Cambridge, England.[1] At the north end it continues as King's Parade where King's College is located. To the south it continues as Trumpington Road (the A1134), an arterial route out of Cambridge, at the junction with Lensfield Road. 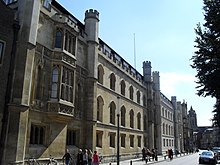 In 1361, at Spittle End, the leper hospital of St Anthony and St Eligius was founded.[2] Addenbrooke's Hospital was founded in 1766 on Trumpington Street, but it has since relocated to larger premises further out of the city. The Cambridge Judge Business School is now on the original site of the hospital, the Old Addenbrooke's Site.[3]

Until the 19th century, Trumpington Street was at the edge of development to the south of Cambridge.[2]

Little St Mary's Parish Church, is next to Peterhouse (just to the north) on the corner of Trumpington Street and Little St Mary's Lane. The first church here was called St Peter-without-Trumpington Gate. The former Emmanuel United Reformed Church building, built to a design of James Cubitt in 1875, is also located on Trumpington Street; this now forms part of Pembroke College's Mill Lane Project development site.

At the northern end on the corner of Corpus Christi College facing King's Parade is the Corpus Clock, a new tourist attraction installed in 2008.

The Trumpington Street branch of Hobson's Conduit still functions as sluices along each side of the street. At this point, it is known as the Pem (east side) and Pot (west side).[4] The Cambridge City Council's Drainage Engineer controls flow through the sluices and generally lets water flow in the open conduits in the street between the months of April and September. Feeds run into Peterhouse and Pembroke College. A run also used to feed into the basement of the old Addenbrooke's Hospital, now the Judge Business School.[5]