HomeJumièges Abbey
Universities of Oxford and Cambridge
For other uses, see Oxbridge (disambiguation).

Oxbridge is a portmanteau of Oxford and Cambridge, the two oldest, wealthiest, and most famous universities in the United Kingdom. The term is used to refer to them collectively, in contrast to other British universities, and more broadly to describe characteristics reminiscent of them, often with implications of superior social or intellectual status or elitism.[1]

Although both universities were founded more than eight centuries ago, the term Oxbridge is relatively recent. In William Makepeace Thackeray's novel Pendennis, published in 1850, the main character attends the fictional Boniface College, Oxbridge. According to the Oxford English Dictionary, this is the first recorded instance of the word. Virginia Woolf used it, citing Thackeray, in her 1929 essay A Room of One's Own. The term was used in the Times Educational Supplement in 1957,[2][3] and the following year in Universities Quarterly.[4]

When expanded, the universities are almost always referred to as "Oxford and Cambridge", the order in which they were founded. A notable exception is Tokyo's Cambridge and Oxford Society; this probably arises from the fact that the Cambridge Club was founded there first, and also had more members than its Oxford counterpart when they amalgamated in 1905.[5] 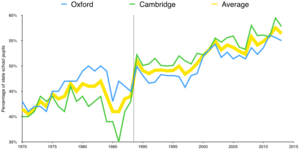 Percentage of state school students at Oxford and Cambridge[6][7]

In addition to being a collective term, Oxbridge is often used as shorthand for characteristics the two institutions share:

The word Oxbridge may also be used pejoratively: as a descriptor of social class (referring to the professional classes who dominated the intake of both universities at the beginning of the twentieth century),[23] as shorthand for an elite that "continues to dominate Britain's political and cultural establishment"[10][24] and a parental attitude that "continues to see UK higher education through an Oxbridge prism",[25] or to describe a "pressure-cooker" culture that attracts and then fails to support overachievers "who are vulnerable to a kind of self-inflicted stress that can all too often become unbearable"[26] and high-flying state school students who find "coping with the workload very difficult in terms of balancing work and life" and "feel socially out of [their] depth".[27]

Eton College is one of a number of schools that sends a disproportionately large percentage of students to Oxbridge.[30]

Other portmanteaus have been coined that extend the term Oxbridge, with different degree of recognition.

The term Loxbridge[31][32][33][34] is also used referring to the golden triangle of London, Oxford, and Cambridge. It was also adopted as the name of the Ancient History conference now known as AMPAH.[35]

Doxbridge is another example of this, referring to Durham, Oxford and Cambridge.[36][37][38] Doxbridge was also used for an annual inter-collegiate sports tournament between some of the colleges of Durham, Oxford, Cambridge and York.[39]

Woxbridge is the name of the annual conference between the business schools of Warwick, Oxford and Cambridge.[40]

Thackeray's Pendennis, which introduced the term Oxbridge, also introduced Camford as another combination of the university names – "he was a Camford man and very nearly got the English Prize Poem" – but this term has never achieved the same degree of usage as Oxbridge. Camford is, however, used as the name of a fictional university city in the Sherlock Holmes story The Adventure of the Creeping Man (1923).