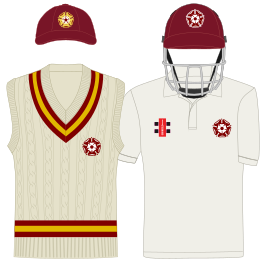 Northamptonshire County Cricket Club is one of eighteen first-class county clubs within the domestic cricket structure of England and Wales. It represents the historic county of Northamptonshire. Its limited overs team is called the Northants Steelbacks – a reference to the Northamptonshire Regiment which was formed in 1881. The name was supposedly a tribute to the soldiers' apparent indifference to the harsh discipline imposed by their officers.[2] Founded in 1878, Northamptonshire (Northants) held minor status at first but was a prominent member of the early Minor Counties Championship during the 1890s. In 1905, the club joined the County Championship and was elevated to first-class status, since when the team have played in every top-level domestic cricket competition in England.[3]

The club plays the majority of its games at the County Cricket Ground, Northampton, but has used outlier grounds at Kettering, Wellingborough and Peterborough (formerly part of Northamptonshire, but now in Cambridgeshire) in the past. It has also used grounds outside the county for one-day games: for example, at Luton, Tring and Milton Keynes.

See also: List of the competitive honours won by county cricket clubs in England and Wales

Record partnership for each wicket

Cricket had probably reached Northamptonshire by the end of the 17th century and the first two references to cricket in the county are within a few days of each other in 1741. On Monday 10 August, there was a match at Woburn Park between a Bedfordshire XI and a combined Northants and Huntingdonshire XI.[13] Woburn Cricket Club under the leadership of the Duke of Bedford was on the point of becoming a well known club. On Tuesday 18 August, a match played on the Cow Meadow near Northampton between two teams of amateurs from Northamptonshire and Buckinghamshire is the earliest known instance of cricket being played in Northamptonshire county.

On 31 July 1878, the official formation of Northants CCC took place at a meeting in the George Hotel, Kettering based on an existing organisation that dated back to 1820. The 1820 date, if it could be verified, would make Northants the oldest club in the present-day County Championship. The club came to prominence in the Minor Counties Championship during the 1890s as, between 1900 and 1904, the bowling of George Thompson and William East was much too good for almost all batsmen at that level. The county applied for first-class status in 1904 and was promoted the following year when it joined the County Championship. They played its inaugural first-class match versus Hampshire CCC at Southampton on 18, 19 & 20 May 1905 when making its County Championship debut.

Stepping up to first-class

Although Thompson and East proved themselves to be bowlers of high class, a weak batting line-up meant that the team remained close to the bottom of the championship table until Sydney Smith arrived in 1909. After three years in the middle of the table, Northants surprisingly improved to finish second in 1912 and fourth in 1913. Thompson, Smith and William "Bumper" Wells formed one of the strongest attacks in county cricket at the time, whilst Smith and Haywood were the county's best batsmen.

Thompson and Smith finished playing after World War I and, during the inter-war period, Northamptonshire were regularly one of the weaker championship sides. This was exacerbated when Vallance Jupp declined due to age and, despite the arrival of Nobby Clark, a young left arm fast bowler from Huntingdonshire who burst onto the scene at the age of 20 in 1922 with 20 wickets at an average of 17.10 and Fred Bakewell, an exciting batsman who regularly exceeded 1000 runs a season, Northamptonshire could only finish above second from last four times between 1923 and 1948, finishing last every year from 1934 to 1938 and enduring a run of 99 matches from 14 May 1935 to 29 May 1939 without a single championship victory, a record that has never been beaten and doesn't look like being beaten in the future. Things got worse for Northamptonshire during this time when Bakewell's career ended due to a broken arm in a car crash that also resulted in the fatality of teammate, Reginald Northway.[14]

After the Second World War, things could only get better for Northamptonshire and they started by recruiting widely from other counties and countries, bringing in Freddie Brown from Surrey; the Australians Jock Livingston, George Tribe and Jack Manning; the New Zealander Peter Arnold; and the Cambridge University opening bat and leg-spinner Raman Subba Row. Brown joined as captain in 1949, and led the team to six place in his first season after previous years of disappointment.[15] Under the new leadership of Dennis Brookes (a stalwart batsman for over 20 years), finished second in 1957, their best finish for 45 years. This was mainly due to the bowling attack of Frank Tyson,[16] Vincent Broderick, Michael Allen, George Tribe and Manning. Northamptonshire were widely considered the best team in England in the late 1950s and early 1960s, during this time Keith Andrew, Northants best ever Wicket-keeper broke the records of most victims in an innings and a season.

Subsequently, the club has seen mixed fortunes. The club has had intermittent success in one-day competitions, but it has still not won the County Championship, although second place was achieved in each of 1957, 1965 and 1976. Nonetheless it has included several famous players qualified for England, including the South African-born batsman Allan Lamb; fast bowler David Larter; the hard hitting opener Colin Milburn, whose career was cut tragically short by an eye injury sustained in a car crash; the reliable batsmen David Steele and Rob Bailey; opening batsman Wayne Larkins; and all-rounders Peter Willey and David Capel.

Northants have recently been criticised for the number of Kolpak players in the team, but for the 2009 season there were only three in Andrew Hall, Johan van der Wath and Nicky Boje, and only one in 2013 in Hall.

Northamptonshire first played at the county ground in Northampton in 1905, and continue to do so till this day even though Northampton Town F.C. shared the ground up until 1994 when the Cobblers moved to Sixfields Stadium. After the football club moved, the ground at the Abington Avenue was demolished and replaced by a new indoor school which includes seating looking on to the ground. In 2009, Northants cricket announced plans to improve the ground by building two new stands on the scoreboard side of the ground, there will also be a permanent commentary box with a view to have a 'mini Lord's' style media centre.

This following table gives details of every venue at which Northamptonshire have hosted a first-class, List A or Twenty20 cricket match:

The Northamptonshire squad for the 2023 season consists of (this section could change as players are released or signed):

Northamptonshire do not automatically award caps to players on their first appearance; instead, they have to be 'earned' through good performances. In recent times, cricketers who are awarded a county cap are given a new cap with yellow stripes on the maroon instead of a plain maroon cap. The following players have received caps: