In December 2020, Wade captained Australia for the first time in international cricket.[3]

Wade was born in Hobart on 26 December 1987. He is the son of Scott Wade, an Australian rules footballer who played for Hawthorn in the Victorian Football League (VFL), for Clarence and Hobart in the Tasmanian Football League (TFL), and served a long tenure as CEO of AFL Tasmania. His grandfather, Michael Wade, served as president of the Hobart Football Club.[4] Wade is the cousin of Collingwood Football Club defender Jeremy Howe.[5]

Wade represented Tasmania in junior cricket and junior football, vice-captaining the Tassie Mariners in the TAC Cup, where he played alongside future Australian Football League players Sam Lonergan, Grant Birchall and Jack Riewoldt. He represented Australia at the 2006 ICC Under-19 Cricket World Cup.

At the age of 16, he was diagnosed with testicular cancer,[6] and received two rounds of chemotherapy before he was cleared of the disease.[7]

Wade is colour blind.[8] He has suffered difficulties on the field due to the colours of certain cricket balls.[9] 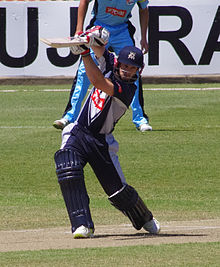 Wade batting for Victoria in 2011.

Wade played one List A match for the Tasmania Tigers in the 2006–07 Ford Ranger One Day Cup season, his only match for Tasmania in any form of the game in his first spell with the state side. His opportunities to be selected as a wicketkeeper in his home state were minimal[clarification needed] due to the presence of Tim Paine, who at the time was seen as the likely successor to Brad Haddin as wicketkeeper in the Australian national team. Rather than attempt to become a specialist batsman, Wade moved to Victoria in the 2007/08 season, and within two years had established himself as the state's first choice wicketkeeper ahead of incumbent Adam Crosthwaite.[10]

Wade scored his maiden first-class century in the 2008/09 season. He made an important contribution to Victoria's win in the 2009/10 Sheffield Shield final against Queensland, when he came out to bat with the team at 5/60 and scored 96 runs. Victoria won the match by 457 runs and Wade was named man of the match.[11] He was suspended and fined for pitch tampering in 2013[12] and in February 2015, scored 152 for Victoria in the Sheffield Shield, his highest first-class score to date.

In January 2011, Wade signed with the Delhi Daredevils,[13] going on to play three times for Delhi in the 2011 Indian Premier League.

Before the 2017/18 season, Wade chose to return to his home state of Tasmania for family reasons.[14] He assumed the first choice wicket keeper role with Tim Paine a member of the Test side, although Wade was selected as a specialist batsman when Paine returned from national duties. The move also saw Wade traded from the Melbourne Renegades to the Hobart Hurricanes in the Big Bash. He went on to be named in the Sheffield Shield team of the year in March 2018.[15]

Mid-way through the 2018/19 season, Wade was appointed captain of Tasmanian team and the Hurricanes after a decision by Cricket Tasmania to remove George Bailey to focus on his batting performance.[16] 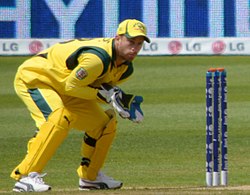 Wade wicketkeeping for Australia in 2013 ODI

Following his success in domestic limited overs cricket, Wade was called up to the Australian team for the first time in October 2011, for a Twenty20 International against South Africa. In February 2012, he made his international breakthrough as a T20I player against India in Sydney, opening the batting and scoring 72 runs from 43 balls to earn the Man of the Match award.

Following that T20I series, Wade was called up to the Australian One Day International team for the 2011–12 Commonwealth Bank Series. He won the Man of the Match award on debut, scoring 67 runs off 69 balls against India at the Melbourne Cricket Ground.[20] During the series, he cemented his place as Australia's first choice limited overs wicket-keeper, and usually opened the batting.[10]

Wade was part of the Australian team for the 2011–12 tour of the West Indies as the limited overs wicketkeeper. However, after Test wicketkeeper Brad Haddin returned home before the Test matches because his daughter was ill, Wade was selected to replace him. He made his Test debut on 7 April against the West Indies at Barbados, and scored his maiden Test century (106) in the third Test in Roseau.[21] Wade was then selected ahead of Haddin for Australia's following Test series against South Africa in November 2012,[22] and held his place until the end of the 2012–13 season, encompassing a home series against Sri Lanka, and a tour of India. He scored his second Test century in the third Test against Sri Lanka in Sydney.

However, from the 2013 Ashes series, Wade lost his Test position to Brad Haddin. He retained his position as ODI wicketkeeper for a period of time, but was ultimately left out of the Australian 2015 Cricket World Cup squad for Haddin. However, after the retirement of Brad Haddin at the end of 2014–15, Wade was recalled to the team for the ODI, and T20I series against England in 2015;[23] but, lost the Test wicketkeeping position to Peter Nevill. It was not until November 2016, three and a half years after his previous Test match, that Wade returned to the Test team, recalled ahead of a struggling Nevill, for the third Test against South Africa, and the subsequent home series against Pakistan.[24]

On 13 January 2017, in the first ODI against Pakistan of a 5-match series, Wade scored his maiden ODI century, which came from 100 balls. He reached 100 on the final ball of Australia's innings, and his effort came when Australia was in trouble at 5 for 78 early in the innings. On the second last ball he got 2 runs off of a ball hit to the infield due to a misfield, which allowed him to retain the strike to complete the hundred. Wade was given out LBW earlier in his innings, but the decision was overturned after he asked for a review.[25]

On 27 January 2017 he was named as ODI captain of Australia in injured Steve Smith's place for their series against New Zealand.[26] He was not fit for the first ODI and ruled out from the squad. Aaron Finch was named stand-in captain for the match.[27] Before the second ODI of that series Wade was ruled out of series due to back injury and Finch continued to captain in the remaining matches.[28]

In July 2019, Wade was added to Australia's squad for the 2019 Cricket World Cup, as cover for Usman Khawaja, who was ruled out of the knock-out stage of the tournament with a hamstring injury.[29] 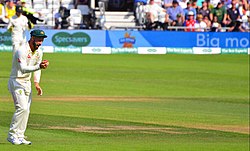 On 16 July 2020, Wade was named in a 26-man preliminary squad of players to begin training ahead of a possible tour to England following the COVID-19 pandemic.[36][37] On 14 August 2020, Cricket Australia confirmed that the fixtures would be taking place, with Wade included in the touring party.[38][39] On 6 December 2020, Wade captained Australia for the first time, leading the side in a T20I match against India at the SCG after Aaron Finch was ruled out due to injury.[3] In August 2021, he was named captain for Australia's five-match T20I series against Bangladesh.[40] Later the same month, Wade was named in Australia's squad for the 2021 ICC Men's T20 World Cup.[41]

He has scored 4 centuries (100 or more runs in a single innings) in Test and 1 in One Day International (ODI) matches. Wade made his Test debut against West Indies at Kensington Oval, Bridgetown in April 2012.[42] His highest Test score of 117 came against England at The Oval, Kennington in September 2019. Wade made his ODI debut in February 2012 against India at the Melbourne Cricket Ground, Melbourne.[42] His highest score of 100* came against Pakistan at The Gabba, Brisbane in January 2017. He has not scored any century in Twenty20 International (T20I) matches.