Mander Organs Limited formerly N.P Mander Limited was an English pipe organ maker and refurbisher based in London. Although well known for many years in the organ building industry, they achieved wider notability in 2004 with the refurbishment of the Royal Albert Hall's Father Willis Grand Organ. The company filed for insolvency in 2020.

Mander built and installed numerous celebrated organs, notably the 68-stop four manual and pedal organ in the Church of St Ignatius Loyola, New York – reportedly the largest mechanical action built by a British builder. Simon Preston said of this instrument: "It is difficult to do justice to this famous instrument in a couple of sentences; suffice to say that to look at this beautiful instrument is to know the sound that will come out of it."[1]

New Mander organs were generally tracker action, which enables the player to give somewhat more expression and removes the delays which are inherent in many electrically actuated organs.

The company was founded in 1936 by Noel Mander. An early setback was the loss of the organ he was working on, along with all his tools, in the first air raid of the Blitz in 1940. The rebuilding of church organs after World War II provided significant business for the company.

Following the retirement of Noel Mander in 1983, the firm was run by John Pike Mander, Noel Mander's son. On John Pike Mander's retirement at the end of 2018 the company's shareholding was transferred to an Employee Ownership Trust, giving all members of staff a stake in the future of the business.[2] The company unexpectedly closed in July 2020 following financial difficulties exacerbated by the COVID-19 pandemic.[3]

The Mander trading name was bought by F.H Browne & Sons - a small regional organ-building firm based near Canterbury. That firm trades as Mander Organ Builders. The remains of the original firm including its equipment, tuning round and contracts were broken up and sold separately to a range of bidders.

Instruments by the original Mander Organs Ltd are found throughout the world, including in Australia, New Zealand, Japan, the Middle East, Scandinavia and the United States. 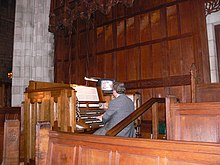 Organ of Princeton University Chapel (1928); major rebuilding by Mander in 1991