HomeJumièges Abbey
Chapter of the New Testament
This article is about the chapter of John's Gospel. For people named John 1, see John I (disambiguation).

John 1 is the first chapter in the Gospel of John in the New Testament of the Holy Bible. The author of the book containing this chapter is anonymous, but early Christian tradition uniformly affirmed that John composed this gospel.[1]

The original text was written in Koine Greek. This chapter is divided into 51 verses.

Some early manuscripts containing the text of this chapter are:

The first chapter of the Gospel of John has 51 verses and may be divided in three parts:

English language versions, which typically divide biblical chapters into sections, often have more divisions: there are 5 sections in the New International Version and the Good News Translation, and 7 sections in the New King James Version.[citation needed] 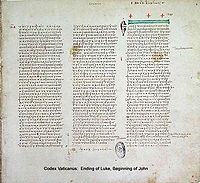 The end of Gospel of Luke and the beginning of Gospel of John on the same page in Codex Vaticanus (4th century).

The first part (verses 1–18), often called the Hymn to the Word,[citation needed] is a prologue to the gospel as a whole, stating that the Logos is "God" ("divine", "god-like", or "a god"[4] according to some translations).

Comparisons can be made between these verses and the narrative of Genesis 1, where the same phrase "In the beginning" first occurs along with the emphasis on the difference between the darkness (such as the "earth was formless and void", Genesis 1:2) and the light (the ability to see things not understood/hidden by the darkness, John 1:5).[citation needed]

According to the writers of the Pulpit Commentary, the phrase "the light of men" (John 1:4) "has been differently conceived by expositors. John Calvin supposed that the "understanding" was intended—"that the life of men was not of an ordinary description, but was united to the light of understanding," and is that by which man is differentiated from animals. Hengstenberg regards it, in consequence of numerous associations of "light" with "salvation" in Holy Scripture, as equivalent to salvation; Christoph Ernst Luthardt with "holiness" and many with the "eternal life", which would introduce great tautology."[6]

The final verse of the prologue (verse 18) recalls verse 1, that no other possibility of human to know God except through Jesus Christ.[7]

3 All things were made through Him, and without Him nothing was made that was made. 4 In Him was life, and the life was the light of men.[8]

The New American Bible (Revised Edition) explains that "the oldest manuscripts have no punctuation here, the corrector of Bodmer Papyrus P75, some manuscripts, and the Ante-Nicene Fathers take this phrase with what follows [in verse 4], as staircase parallelism. Connection with John 1:3 reflects fourth-century anti-Arianism.[10]

5 And the light shineth in darkness; and the darkness comprehended it not.[11]

English translations of John 1:5 variously translate the Greek κατελαβεν as "understanding" (e.g. the New King James Version), but in other translations the meaning is given in terms of a struggle between darkness and light: "the light shines in the darkness, and the darkness has not overcome it" (Revised Standard Version).

Verse 6 introduces "a man sent from God, whose name was John".[12] Benson notes that "John" means "grace": "a name fitly given to the Messiah’s forerunner, who was sent to proclaim the immediate accomplishment of God’s gracious intentions".[13]

Verses 10 and 11 state that "He was in the world, and the world was made through Him, and the world did not know Him. He came to His own, and His own did not receive Him"[14] but theologians differ in their interpretation of these verses. Wesley viewed "in the world" as meaning "even from the creation",[5] the Pulpit Commentary speaks of the "pre-Incarnation activity" of the Word[6] and Joseph Benson wrote that "He was in the world ... from the beginning, frequently appearing, and making known to his servants, the patriarchs and prophets, the divine will, in dreams and visions, and various other ways",[13] whereas in Albert Barnes' opinion, "He was in the world [...] refers, probably, not to his pre-existence, but to the fact that he became incarnate; that he dwelt among human beings".[15]

And the Word was made flesh, and dwelt among us, (and we beheld his glory, the glory as of the only begotten of the Father,) full of grace and truth.[16]

The word "flesh" is emphasized as a 'symbol of humanity', drawing the attention to 'the entry of the Word into the full flow of human affairs'.[17]

For the law was given through Moses, but grace and truth came through Jesus Christ.[18]

The incarnate Word's name is first mentioned in this verse; thereafter "John never uses the noun λόγος, the word, in this signification, throughout this whole book".[19]

Testimony of John the Baptist (verses 19–34) 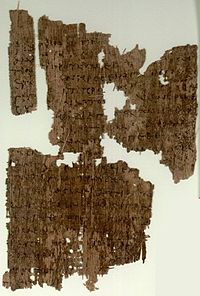 The second part (John 1:34) shows the preparation that John the Baptist was in the process of making for the coming of the Messiah, the Messiah's arrival and the Messiah's first disciples. John has been introduced in verse 6, "a man sent from God",[20] and his witness, known already by the reader, has already been recalled: "This is the One I told you about".[21] The Greek text has the past tense (εἶπον) but both H. W. Watkins, in Charles Ellicott's commentary, and Alfred Plummer, in the Cambridge Bible for Schools and Colleges, prefer a present tense translation such as "John bears witness".[22]

Verses 19–34 present John's manifesto, delivered to the priests and Levites sent by the Pharisees to investigate his message and purpose. In response to their enquiries, John confesses that he is not the Messiah, nor the reappearance of the prophet Elijah (contrast Matthew 11:14, where Jesus states that John is "Elijah who is to come"), nor "the prophet", the one of whom Deuteronomy 18:15, 18 had spoken.[23] In this passage the Messiah and the foretold "prophet" are not necessarily identified with each other; "on the contrary", notes Johann Bengel, "they looked on the prophet as a distinct person from the Christ" (cf. John 7:40–41: Many from the crowd, when they heard this saying, said, "Truly this is the Prophet". Others said, "This is the Christ").[19]

John then reveals that when the Messiah comes he would be unfit to even so much as untie his sandals, let alone baptize him like the many he had up to that point. The next day Jesus appears before John the Baptist, and he then acknowledges Jesus as the Lamb of God (John 1:29) of whom he had been speaking (John 1:30).

The evangelist divides this series of events into four 'days': the day (or period) when the Jerusalem delegation met John to enquire into his identity and purpose (John 1:19-29) is followed by John seeing Jesus coming towards him "the next day" (John 1:36), and on "the next day again"[24] he directs his own disciples towards following Jesus (John 1:35-37). A fourth 'day' follows (John 1:43) on which Jesus wanted to go to Galilee and invited Philip to follow him. Bengel calls these "Great Days!", because "the care of this Evangelist in marking times is remarkable".[19]

As the chapter progresses further, the gospel describes how Jesus calls his first disciples, Andrew and an unnamed disciple (verses 35–40). The unnamed disciple was possibly John, the evangelist.[6] Andrew finds his brother Simon (verses 41–42), and Jesus changes Simon's name to Cephas (Peter) (verse 42). Cephas, original Greek: Κηφᾶς (Kēphâs), means "a rock" (Young's Literal Translation) or "a stone" (King James Version). This provided a powerful analogy as to the role Peter would have after the crucifixion; to lead the development of the church. Name changes occur in other places in the Bible and demonstrate God's authority as well as what that person would become, do, or had done, such as Abram to Abraham and Jacob to Israel.

Jesus' first active sign of insight comes in verse 47, in his recognition of Nathaniel as an Israelite "in whom there is no guile",[25] "an affirmation showing intimate knowledge",[19] leaving Nathaniel thoroughly impressed by Jesus' foreknowledge of his personal character (cf. Jesus' knowledge of the Samaritan woman at the well in John 4:18, 30).

The titles of Jesus

Within these verses Jesus is given the following titles:[26]

The Disciple whom Jesus loved

The first appearance of the "disciple whom Jesus loved" in this Gospel is as one of the two disciples of John the Baptist who become the first followers of Jesus, but this is indicated in a subtle way.[27] Bauckham notes the occurrence of at least two specific words in the narratives of both the first and the last appearance of this disciple: "to follow" (Greek: ἀκολουθέω 'akoloutheó') and "to remain/stay" (Greek: μένω, 'menó').[27] In verse 1:38 it is stated that "Jesus turned, and seeing them following ('akolouthountas'), said to them, "What do you seek?"", then in verse 1:39 they "remained ('emeinan') with Him that day".[27] In the last chapter of the Gospel, the last appearance of the 'Disciple whom Jesus loved' is indicated using similar words: in verse 21:20 it is written that "Peter, turning around, saw the disciple whom Jesus loved following ('akolouthounta')", then in verse 21:22 "Jesus said to him [Peter], "If I will that he remain ('menein') till I come, what is that to you?"[27] Bauckham sees the placement of the appearances of the disciple as "the inclusio of eyewitness testimony" to privilege his witness (in the Gospel of John 21:24) over Peter's, not to denigrate Peter's authority, but rather to claim a distinct qualification as an 'ideal witness' to Christ, because he survives Peter and bears his witness after Peter.[28][29] The inclusio also reinforces the Beloved Disciple's unique status among the disciples: He has followed and remained with Jesus from beginning to end. The appearances are also close to Peter's, as the first one, along with Andrew, happened just before Peter's, who was then given the name 'Cephas' (alluding Peter's role after Jesus' departure), and the last one, just after Jesus' dialogue with Peter, acknowledging the significance of Peter's testimony within "the Petrine's inclusio", which is also found in the Gospel of Mark and Luke (see Luke 8 under "The Women who sustained Jesus").[30]

In the Latin Rite of the Catholic Church and in Western Rite Orthodoxy, the chapter's first fourteen verses are known as the "Last Gospel", as they are recited at the end of the Tridentine Mass (or "Extraordinary Form") of the Mass. This is distinct from the Proclamation of the Gospel that occurs much earlier in the service.

After reciting the dismissal formula Ite Missa est, the priest reads the Last Gospel in Latin from the altar card to their left. Instead of touching the text with his thumb and then making the small Sign of the Cross as at the Gospel reading, he instead touches the altar. At the beginning of verse 14, Et Verbum caro factum est ("And the Word became flesh"), the priest and attending servers genuflect. Any congregants present, who remain standing for the reading, would kneel at this point, responding with Deo gratias ("Thanks be to God") at its conclusion.

This ritual began as a private devotion for the priest after Mass. It is not part of the 1969 Mass of Paul VI (known as the "Ordinary Form" and widely used today) that was introduced after the Second Vatican Council.

The King James Version of verse 29 from this chapter is cited as texts in the English-language oratorio "Messiah" by George Frideric Handel (HWV 56).[32]