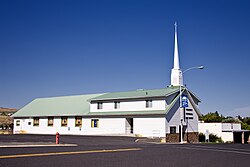 The EFCA shares some early ties with those who formed the Swedish Evangelical Covenant Church as they both came from Mission Friends groups. It has been a member of the National Association of Evangelicals since 1943, the year after that organization was formed.

In its Statement of Faith, the Evangelical Free Church of America affirms the authority and inerrancy of the Bible; the Trinity; atonement through the sacrifice of Jesus Christ; original sin; Christ as head of the church and the local church's right to self government; the personal and imminent return of Christ; the bodily resurrection of the dead; and the two ordinances of water baptism and the Lord's Supper.[4]

The EFCA passed a substantial revision to its Statement of Faith on June 26, 2008, the first revision since the Statement was first adopted in 1950.[5] This revision was proposed in order “to update archaic language, to clarify some theological ambiguities, to seek greater theological precision, to address new issues, to have a SoF that would be better suited to be used as a teaching tool in our churches.”[6] Specific beliefs based on biblical interpretation can vary somewhat due to the congregational governance system that gives autonomy to individual local EFCA churches.

The EFCA does not ordain women.[7] The church describes its stance on homosexuality and same-sex marriage as "welcoming but not affirming," stating that the church "will not credential one who engages in homosexual conduct or one who does not believe that homosexual behavior is sinful, even though remaining celibate." 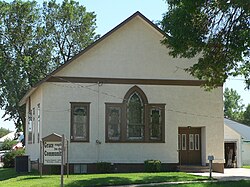 The word Free in the Evangelical Free Church's name refers to its congregational polity, meaning each member church is autonomous, and to its history, meaning that the free churches were free from state control.[8] The governing body of the EFCA is the Leadership Conference held annually.[9] Delegates to the conference are credentialed ministers, chaplains, tenured university faculty, and representatives of each EFCA church. The Leadership Conference elects the board of directors which acts as the governing body between Leadership Conference meetings. As chair of the Directional Team, the President coordinates the work of the various national boards and ministries.[10] The office of the President has responsibility for reviewing the licensing and ordaining of ministers and, in addition, oversees the discipline and restoration process for pastors.

The EFCA is divided into 17 regional districts which, among other responsibilities, examines and approves applicants for ordination.[10][11] The denomination maintains headquarters in suburban Minneapolis, Minnesota, and engages in ministries in education, publications, senior housing, children's homes, and camp facilities. The EFCA supports the mission of Trinity International University and Trinity Evangelical Divinity School in Deerfield, Illinois; Trinity Law School in Santa Ana, California; and supports Trinity Western University in Langley, British Columbia, Canada.