HomeJumièges Abbey
In Christianity, reception of both the consecrated bread and wine of the Eucharist 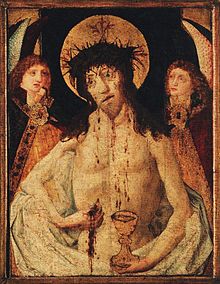 Man of Sorrows from Prague, c. 1470. Jesus Christ is taking out a host from his wound while his blood is flowing down into a chalice. The depiction of Christ, symbolically offering his body and blood, clearly demonstrates the practice of receiving the Communion under both kinds, which was crucial for the Bohemian Reformation of the 15th century.

In reference to the Eucharist as a sacrifice, Communion under both kinds belongs at least to the integrity and essence, of the rite, and may not be omitted without violating the precept of Christ: "Do this in remembrance of me" (Luke 22:19). This is mentioned implicitly by the Council of Trent (Sess. XXI, c. i; XXII, c. i),[1] and the General Instruction of the Roman Missal states that the people "should share the cup when it is permitted. Then, Communion is a clearer sign of sharing in the sacrifice that is actually being celebrated."[2] 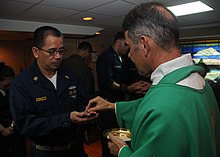 A sailor receives Communion from a Catholic chaplain aboard a US Navy ship.

Catholicism teaches that Christ is sacramentally (and equally) present under each species, and therefore if a person receives only one species, Christ is fully present and nothing is lacking.[3]

In the Early Church, Communion was ordinarily administered and received under both kinds. That such was the practice mentioned by Paul in I Corinthians 11:28.[1] But side by side in the Early Church there existed the custom of communicating in certain cases under one kind alone e.g. when people took home some of the Eucharist after Sunday worship and communicated during the week and also when the Eucharist was brought to the sick.[1]

By the Middle Ages, the Church had become, like most of European society, increasingly hierarchical. There was much stress on being holy when receiving Communion, and a greatly heightened appreciation of the sufferings of Christ. This meant that all who approached the altar were to be as pure as possible, and inevitably led to the exclusion of the laity from administering the Eucharist, reserving the practice to the clergy. It is difficult to say when the practice of offering the chalice to the people stopped, but it may be presumed that this was part of the way in which Church authorities sought to prevent anything disrespectful happening to the Eucharist; it was also, by this time, that Communion was given only on the tongue.[citation needed]

This practice was challenged by the Bohemian reformer, Jacob of Mies, who in 1414 began to offer Communion under both kinds to his congregation. The matter was reviewed by the 13th Session of the Council of Constance, in 1415; the council rejected the grounds for offering the chalice to lay people and banned the practice.[4] This became the most emblematic issue of the Hussite Wars, which resulted in the permission of the communion under both kinds for Utraquists in Bohemia in 1433 (it would be banned again in 1627 and allowed again by the Patent of Toleration in 1781). In the following century, this was challenged again by the Protestant Reformers, including Martin Luther, John Calvin and Huldrych Zwingli.[4] The Council of Trent referred to the pope the question whether the petition of the Holy Roman Emperor to have the use of the chalice allowed in his dominions be granted; in 1564 Pius IV did grant this permission to some German bishops, provided certain conditions were fulfilled. However, his concession was withdrawn in the following year.[1]

In the 20th century, Catholic liturgical reformers began to press for a return to Communion under both kinds, citing the practice of the church before the thirteenth century. There were spirited debates over the issue at the Second Vatican Council, resulting in a compromise. The following text was finally issued by the bishops; "communion under both kinds may be granted when the bishops think fit, not only to clerics and religious, but also to the laity, in cases to be determined by the Apostolic See, as for instance, to the newly ordained in the Mass of their sacred ordination, to the newly professed in the Mass of their religious profession, and to the newly baptized in the Mass which follows their baptism".[5] Regular use of Communion under both kinds requires the permission of the bishop, but bishops in many countries have given blanket authorisation to administer Holy Communion in this way. In the United States, the Notre Dame Study of Catholic Parish Life showed that by 1989, slightly less than half of the parishes in its survey offered the chalice to their congregations.[5]

The Eastern Orthodox Church has consistently practised communion under both kinds. Both the clergy and the people normally receive in both kinds.

Communion of only the Eucharistic Bread is seen as imperfect by the Orthodox churches, who do not normally follow this practice, even in extremis.[6]

During the celebration of the Divine Liturgy, when it comes time for Holy Communion, the Lamb (a leavened Host) is first broken into four pieces: one portion is placed whole into the chalice; from one portion the clergy receive communion; and from the remaining two portions, the laity are Communed. The clergy will each receive first the Body of Christ, taking it in their hands, and then sip from the chalice. After the communion of the clergy, the portions of the consecrated Lamb for the faithful (i.e., the congregation) are cut into tiny portions and placed in the chalice. When the faithful come forward to receive Communion, they cross their hands over their chest, and the priest gives them both the Body and Blood of Christ from the chalice, using a spoon. In this manner, everyone receives in both kinds, but no one takes either the consecrated Bread or the Chalice in their hands, thus reducing the possibility of crumbs accidentally being dropped or any of the Blood of Christ being spilt on the floor.

When the priest takes Holy Communion to the sick, he transfers a portion to a vessel which is worn around the neck. Inside the vessel are compartments for a gilded box to contain the Mysteries, a tiny chalice, a bottle for wine, a small gilded spoon and often a gilded set of tweezers. Once at the sick person's bedside he uses the tweezers to take a particle of the Mysteries from the box and place it in the chalice. He then pours a small amount of unconsecrated red wine into the chalice which softens the dried particle as he hears the sick person's confession. Then, after saying the Prayers before Communion, he administers Holy Communion in both kinds to the sick person using the spoon, exactly as is done during the Divine Liturgy. 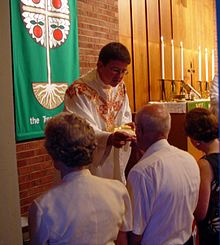 A Lutheran priest administers the Eucharistic elements to the faithful during the celebration of the Holy Mass.

In our churches, communion is administered to the laity in both kinds, because this is a manifest command and precept of Christ. Matt. 26:27. 'Drink ye all of it.' In this passage Christ teaches, in the plainest terms, that they should all drink out of the cup. And in order that no one may be able to cavil at these words, and explain them as referring to the clergy alone, Paul informs us that the entire church at Corinth received the sacrament in both kinds. (1 Cor. 11:26.) And this custom was retained in the church for a long time, as can be proved by history, and the writings of the Fathers. Cyprian frequently mentions the fact that in his day the cup was given to the laity. St. Jerome also says, the priests, who administer the sacrament, dispense the blood of Christ to the people. And pope Gelasius himself commanded that the sacrament should not be divided (distinct. 2, de consecat. cap. comperimus). There is no canon extant, which commands that one kind alone should be received. Nor can it be ascertained when, or by whom, the custom of receiving bread alone was introduced, although cardinal Cusanus mentions the time when it was approved. Now it is evidence that such a custom, introduced contrary to the divine command, and also in opposition to the ancient canons, is wrong. It was therefore improper to coerce and oppress the conscience of those who wished to receive the sacrament agreeably to the appointment of Christ, and compel them to violate the institution of our Lord. And inasmuch by Christ, the custom of carrying about the host in the procession is omitted amongst us.[7]

The Eucharist is administered by a Lutheran priest under both kinds, often at the chancel rails or in a communion line, after hosts and a common chalice are consecrated.

The 30th article of the 39 articles of the Church of England, as well as Article XIX of the Methodist Articles of Religion states: "The Cup of the Lord is not to be denied to the lay-people: for both the parts of the Lord's Sacrament, by Christ's ordinance and commandment, ought to be ministered to all Christian men alike."[8][9]

In Anglican and Methodist liturgy, the bread (typically in wafer form) is administered by licensed clergy into the cupped hands of the communicant, usually kneeling at the altar rail. The chalice may be administered by the clergy or, in certain dioceses, by licensed laypersons. The bread may be consumed before drinking the wine from the chalice or may be dipped into the wine prior to consuming (intinction).[10]

Elisabeth of Brandenburg secretly takes communion in both kinds.

Communion under both kinds for the whole congregation was a central issue for the Protestant reformers, since they believed that it had been specifically commanded by Jesus at the Last Supper.[5] John Calvin in his seminal 1536 work, Institutes of the Christian Religion, wrote; 'For Christ not only gave the cup, but appointed that the apostles should do so in future. For his words contain the command, "Drink ye all of it." And Paul relates, that it was so done, and recommends it as a fixed institution (First Epistle to the Corinthians 1Corinthians 11:25)'.[11]

Based on a document that Latter Day Saints believed was a revelation to Joseph Smith, however, it has been acceptable for Latter Day Saints to use other substances in the sacrament. As stated in the document: "It mattereth not what ye shall eat or what ye shall drink when ye partake of the sacrament, if it so be that ye do it with an eye single to my glory—remembering unto the Father my body which was laid down for you, and my blood which was shed for the remission of your sins."[12] As a result of this revelation and anti-alcohol sentiment, the common practice of the Church of Jesus Christ of Latter-day Saints since the early 20th century has been to use bread and water and not to involve wine or grape juice.[13][14] The second largest church to emerge from the early Latter Day Saint movement, the Community of Christ (formerly the Reorganized Church of Jesus Christ of Latter Day Saints), generally uses unfermented grape juice and whole wheat bread.