HomeJumièges Abbey
This article is about the Episcopal church in the centre of Edinburgh. For the Roman Catholic church in Portobello, Edinburgh, see St John the Evangelist RC Church, Portobello.
Church in Edinburgh , Scotland

The Church of St John the Evangelist is a Scottish Episcopal church in the centre of Edinburgh, Scotland. It is sited at the west end of Princes Street at its junction with Lothian Road, and is protected as a category A listed building.[1]

The church was dedicated as St John's Chapel on Maundy Thursday 1818 with construction having begun in 1816. It was designed by the architect William Burn[2] the previous year, at the age of only 25.

1889 view looking east along Princes Street, with the church to the right in front of St Cuthbert's Church and Edinburgh Castle

The congregation had begun in 1792 when Daniel Sandford came to Edinburgh to minister on Church of England lines. In 1797 the Qualified congregation moved to Charlotte Chapel which was re-built on larger lines in 1811. They sold shares to fund a new church, the banker Sir William Forbes being the main figure, and Charlotte Chapel was then sold to the Baptists.

Edward Bannerman Ramsay joined St John's as curate in 1827. He succeeded Bishop Sandford as minister in 1830, and stayed until his own death in 1872, having been Dean from 1846.

The sanctuary and chancel were built in 1879–82 by Peddie & Kinnear (John Dick Peddie and Charles Kinnear). The vestry and Hall were added in 1915–16 by John More Dick Peddie and Forbes Smith.

The war memorial was added in 1919 to a design by Sir Robert Lorimer. Lorimer also designed and oversaw the addition of faux-vaults when Lothian Road was widened in 1926.[3]

St John's holds daily services and is unique in that it is the last remaining Episcopal church in Scotland to hold the weekly service of Matins.[citation needed] 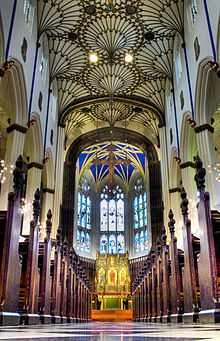 The supporting arch to the west tower

The lower terraces of the graveyard

The plaster ceiling vault is derived from that found in the Henry VII Chapel in Westminster Abbey.

Stained glass is largely by Ballantine, but the east window is by William Raphael Eginton.[4]

The morning chapel was furnished by Walker Todd in 1935.

An extension was added to the south-east corner in 2018.

St John's is one of three churches which form Together, an ecumenical grouping in the New Town of Edinburgh. The others are St Andrew's & St George's West and St Cuthbert's.[6]

The church is also home to the Just Festival (formerly known as the Festival of Spirituality and Peace), which takes place each August alongside the Edinburgh Festival Fringe.[citation needed]

An Ethiopian tabot, a replica of Moses' Tablets of Law, was discovered in storage at St John's Church, and was returned in February 2002 to Addis Ababa.[7][8]

in 2017, the Scottish Episcopal Church changed its marriage canon to allow for clergy with the consent of their congregations to opt into the Scottish same-sex marriage legislation. The first marriage of a couple of the same gender inside an Anglican church in the British Isles was solemnised at St John's in September that year with the rector presiding.[9]