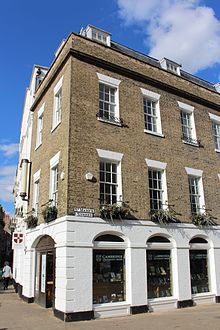 Bowes & Bowes was a bookselling and publishing company based in Cambridge, England. It was established by Robert Bowes (1835–1919), a nephew of Daniel Macmillan (1813–1857) — the founder, with his brother Alexander, in 1843, of a firm which by 1850 was a thriving bookshop with the official name ‘Macmillan & Co.’[1] The same bookshop was eventually owned by Alexander Macmillan in partnership with Robert Bowes. The company became known as ‘Bowes & Bowes’ only in 1907, George Brimley Bowes (1874-1946, Robert Bowes’ son) having become a partner in the business in 1899.[2] The firm continued as a family business until 1953 when it was acquired by W H Smith, who continued to operate it under the original name until 1986. In that year the business’s name was changed to Sherratt & Hughes.

The Bowes & Bowes site at 1, Trinity Street, Cambridge has a claim to be the oldest bookshop in the country, books having been sold there since 1581.[3] Since the closure of Sherratt & Hughes in 1992, the site has been the home of the Cambridge University Press bookshop.

The firm’s backlist included titles by Erich Heller, who was also the general editor of a series of books published by Bowes & Bowes (Studies in Modern European Literature and Thought, some of which were printed in the Netherlands).