The bishop of London is the ordinary of the Church of England's Diocese of London in the Province of Canterbury. By custom the Bishop is also Dean of the Chapel Royal since 1723.

The diocese covers 458 km2 (177 sq mi) of 17 boroughs of Greater London north of the River Thames (historically the City of London and the County of Middlesex) and a small part of the County of Surrey (the district of Spelthorne, historically part of Middlesex). The see is in the City of London, where the seat is St Paul's Cathedral, which was founded as a cathedral in 604 and was rebuilt from 1675 following the Great Fire of London (1666).

The bishop's residence is The Old Deanery, Dean's Court, City of London. Previously, Fulham Palace was the residence for over 1000 years, and from the 18th century, the bishop had chambers at London House next to the Bishop's Chapel in Aldersgate Street.[3][citation needed]

The current (133rd) bishop of London is Sarah Mullally. She was confirmed on 8 March 2018 after acting in post immediately after her canonical election on 25 January 2018.[4][5] The diocesan bishop of London has had direct episcopal oversight in the Two Cities area (the City of London and the City of Westminster) since the institution of the London area scheme in 1979.[6] 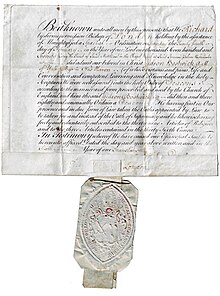 A certificate of ordination (with seal) given at Westminster by Richard Terrick, Bishop of London, 24 February 1770. The arms on the seal are blazoned: Per pale: 1. Gules, two swords in saltire points uppermost argent hilts and pommels or (for the office of the Bishop of London), and 2. ___ (the personal arms of Richard Terrick?), surmounted by a bishop's mitre above an escallop.

The first mention of christianity in England comes from Tertullian, possibly writing in the early 200s,[7] but the first mention of an implied church in London relates to a Bishop of London, either Restitus or Aldephius, attending the Council of Arles in 314 AD.[10]

The location of Londinium's original cathedral is uncertain.[11] The present structure of St Peter upon Cornhill was designed by Christopher Wren following the Great Fire in 1666 and stands upon the highest point in the area of old Londinium, but possibly more significantly directly above the location of a pagan shrine room (aedes) within the great Roman London basilica.[12] [13] 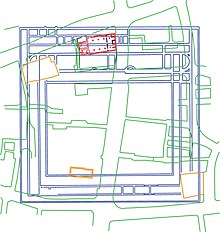 There is a medieval tradition which maintains the church was founded by King Lucius in AD 199. If St Peter's was built in the roman era, it would make the church contemporaneous to the Romano-British church at Silchester, similarly built adjacent to the Roman Basilica and most likely pre-Constantine in age.[14][15]

Some caution may be exercised in this respect however, as other research suggests it very rare for early english christian churches to be founded in pagan temples,[16] and that when temples were turned into churches, this occurred later, in the late sixth century onwards.[17] [18] Historians seem to be more confident that early english christian churches met in private homes, and that some roman villas also installed places of christian worship .[19]

Whether the Lucius story is a fiction, or whether there was actually a church was deliberatly erected over the shrine room is unclear and could only be settled by archaeological exploration under St Peter's. However, it is interesting that whilst four medieval churches were built around the same time on the foundations of the Roman Basilica and forum, the London city authorities in 1417 determined that St Peter's dated back to Roman times, and indeed was the original seat of English christianity. [20] This suggestes there may have been something extra in St Peter's location and longevity which justifies it predating the others.

In 1995, a large and ornate 4th-century church was discovered on Tower Hill, which seems to have mimicked St Ambrose's cathedral in the imperial capital at Milan on a still-larger scale. This possible cathedral was built between 350 and 400 out of stone taken from other buildings, including its veneer of black marble. It is perfectly possible that the stone came from the London basilica and forum, which was demolished and levelled around the same time. The 4th-century was burnt down in the early 5th century.[21][22]

According to a 12th-century list, which may be recorded by Jocelyne of Furness, there had been 14 "archbishops" of London, claiming London's Christian community was founded in the 2nd century under the legendary King Lucius and his missionary saints Fagan, Deruvian, Elvanus, and Medwin.[23] None of that is considered credible by modern historians.

Following the establishment of the archdiocese of Canterbury by the Gregorian mission, its leader St Augustine consecrated Mellitus as the first bishop to the Saxon kingdom of Essex in 604. (The first bishop of Rochester was also consecrated the same year.) Bede records that Augustine's patron, King Æthelberht of Kent, built a cathedral for his nephew King Sæberht of Essex as part of this mission. This cathedral was constructed in "London" and dedicated to St Paul.[24] Although it's not clear whether Lundenwic or Lundenburh was intended, it is generally assumed the church was located in the same place occupied by the present St Paul's Cathedral atop Ludgate Hill in London. Renaissance rumours[25] that the cathedral had been erected over a Roman temple of the goddess Diana are no longer credited: during his rebuilding of the cathedral following the Great Fire of 1666, Christopher Wren reported discovering no trace of such a structure.[26] Surrey was at times a part of the Kingdom of Essex, and with it the Diocese of London, a situation that changed following a synod at Brentford around 705, reflecting the growing strength of Mercia at the expense of Essex.[27]

Because the bishop's diocese includes the royal palaces and the seat of government at Westminster, he has been regarded as the "King's bishop" and has historically had considerable influence with members of the Royal Family and leading politicians of the day. Since 1748 it has been customary to appoint the Bishop of London to the post of Dean of Her Majesty's Chapels Royal,[28] which has the effect of putting under the bishop's jurisdiction, as dean, several chapels (at the Tower of London and St. James's Palace, among others) which are geographically in the Diocese of London but, as royal peculiars, are officially outside the bishop's jurisdiction as bishop.

The Bishop of London originally had responsibility for the church in the British colonies in North America, although after the American Revolution of 1776, all that remained under his jurisdiction were the islands of the British West Indies. The diocese was further reduced in 1846, when the counties of Essex and Hertfordshire were ceded to the Diocese of Rochester.[citation needed]

The Report of the Commissioners appointed by his Majesty to inquire into the Ecclesiastical Revenues of England and Wales (1835), noted the annual net income for the London see was £13,929.[29]

The dates and names of these early bishops are very uncertain.

Among those who called Assistant Bishop of London, or coadjutor bishop, were: