American Bible Society, based in the United States, publishes and distributes interconfessional translations of the Christian Bible[1] and provides study aids and other tools to help people engage with it. Founded on May 11, 1816, in New York City, it is best known for its Good News Translation of the Bible, written in the contemporary vernacular. American Bible Society also publishes the Contemporary English Version.

American Bible Society is a member of the United Bible Societies, Forum of Bible Agencies International, Every Tribe Every Nation and not affiliated with any single denomination. However, it does not consider Latter-day Saints or Jehovah's Witnesses to be Christians.[2]

The American Bible Society was founded in 1816 by prominent American Protestants. The first President was Elias Boudinot, who had been President of the Continental Congress from 1782 to 1783. John Jay, the first Chief Justice of the United States Supreme Court, was named president in 1821, and a number of illustrious individuals like Frederick Theodore Frelinghuysen and , a former president of the Philharmonic Society of New York, headed up the organization over the years. Francis Scott Key, the writer of the United States' National Anthem, was a Vice President of the organization from 1817 until his death in 1843. American Bible Society's first headquarters were on Nassau Street in Lower Manhattan.[4] 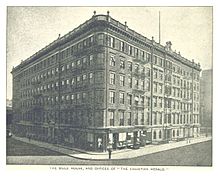 In an incident well publicized at the time, the ABS refused a donation offered in 1834 by the American Anti-Slavery Society. The purpose was to subsidize the distribution of Bibles to American slaves, about one-sixth of the population, as abolitionists believed that knowledge of the Bible hastened the end of slavery. (That the Bible supported slavery was maintained by a number of Southern clergymen.) While it sent Bibles to Liberia for the former slaves there, the ABS left domestic distribution in the hands of its state auxiliaries, who refused to distribute Bibles directly to slaves. The Society was widely seen as insufficiently committed to the abolition of slavery, to the point that the American and Foreign Anti-Slavery Society "decided to throw most of its support behind the American Missionary Society, an organization that it believed was making a 'systematic effort' to get Bibles and tracts to slaves."[6]

In 1852, while Theodore Frelinghuysen was President of American Bible Society, the Bible House was built, occupying the whole of the block bounded by Third and Fourth Avenues, Astor Place, and Ninth Street in New York City.[4][7] Suffragist and economist Virginia Penny offered an employment office for women in the Bible House, and she gave lectures on the many different types of jobs for women in New York City.[8] By 1920, it was one of the oldest office buildings in the city.[9]

The American Bible Society's mission is to make the Bible available to all people and to that end, during the 19th century, four canvasses of the United States for this purpose were undertaken. These canvasses took place in 1829, 1856, 1866, and in 1882. During the fourth canvass, in 1882, more than 6.3 million families were visited, and 473,806 families were supplied with Bibles; in addition nearly 300,000 individuals received Bibles.[9] American Bible Society sold 437,000 Scriptures and portions in 1898 in China.[10]

In 1998, American Bible Society paid about $1.6 million to Sony Music Entertainment in order to distribute several Christian children's series, including and Kingsley's Meadow.[12] In 1999, the organization launched its first major Internet ministry, ForMinistry.com, a free church web-builder. Operations ceased in 2013 after 14 years of serving over 180,000 churches and ministries.[13] 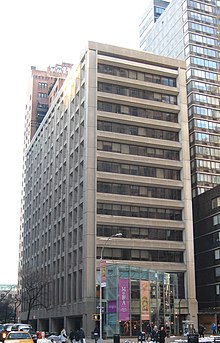 In the aftermath of the September 11 attacks, American Bible Society distributed more than one million Scriptures and offered downloadable portions free of charge to those affected by the tragedy. Staff members also volunteered at Ground Zero distributing Scripture Portions to rescue workers. It has also maintained its commitment to military, including producing a pocket-sized military Bible, developed jointly with the aid of Catholic and Protestant chaplains from all branches of the armed forces. Since 1817, it has distributed almost 60 million free Bible resources to America's armed forces.[14] It also provides Scriptures to victims of natural disasters.

Following the tsunami in 2004, American Bible Society worked in cooperation with the United Bible Societies and partner Bible Societies in Thailand, Indonesia, India and Sri Lanka to provide a host of Bible resources to people in the affected regions. In 2005, it sent nearly a million Bibles and Scripture portions to those who survived the devastation of Hurricane Katrina. American Bible Society formed a partnership with Habitat for Humanity to give a free Bible to each of its new homeowners in the United States.

In 2007, American Bible Society partnered with The Salvation Army to promote literacy with its program Mission: Literacy.

In 2013, American Bible Society and United Bible Societies launched the Digital Bible Library, a repository that houses digital copies of Bible translations and makes the texts available for repurposing across any media platform. Doug Birdsall was also appointed in 2013 as President and CEO.[16]

In 2014, American Bible Society contracted with ICANN to operate the .BIBLE TLD Registry. The availability of .BIBLE domain names will accelerate global online Bible engagement.[17] The first site to launch was American.Bible in September 2015, which makes the message of the Bible accessible to people in a way that fits their digital lives.[18] In 2014, Roy Peterson succeeded Doug Birdsall, having previously served as President of the Seed Company and Wycliffe Bible Translators.[19]

In 2015, American Bible Society announced that it had sold 1865 Broadway to AvalonBay Communities for US$300 million and was moving to a new location in Philadelphia, leasing 100,000 square feet at 401 Market Street.[3]

In December, 2017,[20] American Bible Society introduced the Affirmation of Biblical Community, an employee policy which requires staff to align around a core set of Christian beliefs and practices.[21] The organization came under criticism as the policy excludes individuals who were homosexual, stating they had to agree that marriage was between one man and one woman, or unwed heterosexuas living together, it stated they had to agree not to have sex until they were married.[22] While the organization lost 20 percent of its workforce in 2018, according to American Bible Society, that 20 percent of the organization's staff left in response to the Affirmation. Leadership of the organization attempts to explain that the 20 percent attrition in 2018 was consistent with annual totals, but could not show that in the year 2017 that they suffered a 20% loss in staff prior to the new Affirmation policy.[23]

In 2021, American Bible Society opened the Faith and Liberty Discovery Center to invite discovery of the influence of the Bible on individuals in key historical and personal moments.[26][27][28]

The Faith & Liberty Discovery Center is a new museum that opened on Independence Mall in the summer of 2021.[29][30] It says it "explores the relationship between faith and liberty in America from its founding to today, by illuminating the influence of the Bible on individuals in key historical and personal moments.".[31]

While media coverage cites quotes from American Bible Society leadership that the FLDC will “...be an exciting experience for people of all faiths and backgrounds,"[34] American Bible Society's own website indicates they are seeking to convert visitors and hope the museum will, "spark a curiosity in every visitor to ask themselves, 'What difference can the Bible make in my life today?'"[35]

In 2019, American Bible Society paid to relocate White Water, a 40-foot-long, 16-foot high masterpiece of geometric stainless steel sculpture of 1978 by Robinson Fredenthal, from 401 Market Street to the Woodmere Art Museum[36] The piece was commissioned for its location at 401 Market Street by the Philadelphia Redevelopment Authority's Percent for Art Program, which mandated a certain percentage of construction costs for a development involving city-owned property to go toward public art.[37] The current site, however, is not devoid of public art. The Faith & Liberty Discovery Center includes a 4-story-high sculpture called the Beacon that completely surfaced in white thermoformed DuPont Corian® Solid Surface.[38] The surfaces represent the three documents essential to the founding of the United States: the Declaration of Independence, the U.S. Constitution, and the Bible. The core values from these documents are carved into the sculpture's edges, symbolizing the inseparable relationship.[39]

The Museum of Biblical Art, was an independent but affiliated organization and was housed in American Bible Society's building at 1865 Broadway, in New York. It has closed.[40] 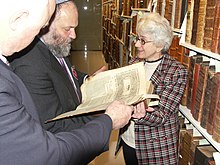